Back in January of 2000 I was working for a prominent Burgundy House that has been family owned since the 1700’s. Burgundy is the birthplace of the illustrious Pinot Noir grape, among others. On a quite January evening a colleague of mine and I were invited to taste some New World interpretations of the Pinot Noir grape by the National Sales Manager of Archery Summit a prominent estate in Oregon. We headed to Bin 36 a now defunct wine bar and restaurant located at the time in the heart of Chicago just steps away from The House of Blues Hotel and Concert Hall. I remember an exceptional meal followed by a tasting of Archery Summit’s 2000 vintage releases. The wineries manager had the bottles lined up like little soldiers standing to attention. Archery Summit Pinot Noir, Archers Edge, Renegade Ridge, Arcus Vineyard, Red Hills Vineyard and ending with the Premium Cuvee. The Restaurants wine director joined us as well in anticipation of these little treasures. The winery was only 5 years old at the time and owned 6 vineyards encompassing 120 acres some of the oldest Pinot Noir vines in the Oregon Willamette Valley.

The Archery Summit Pinot Noir had a medium plus nose, produced from vines planted in 1973- 2000 sourced from 80 different blocks. Aged in 30% new oak and 30% whole cluster fermentation. Best to enjoy it young. The Arcus Pinot Noir had a wonderful nose and was a lot more floral than the other wines. Violets and roses, with bright juicy fruit on both the nose and
palate with just a touch of spice adding complexity. A great mouthfeel with enough tannins to age a bit as well.

That is when the front door of the restaurant was busted open by two young men with painted clown faces who ran through the aisles of the restaurant screaming and knocking over glasses. Everyone was caught by surprise. Was this some kind of joke? I looked outside and saw hundreds of young men with painted clown faces running around with a sense of rage some being chased by scores of policemen who were chasing them relentlessly like a cheetah chasing her prey. Soon there were more and more police arriving. In no time we were fully intrenched in what was a full-blown riot right on North Dearborn Street in downtown Chicago. The owner of the restaurant quickly locked the restaurants doors preventing more clowns from coming in. There is in nothing worse than being in a restaurant filled with a bunch of clowns. It was a surreal moment as we sat looking at this line up of Oregonian Pinots temporarily mellowing out in our elegant stemware due to a bunch of rioting clowns. 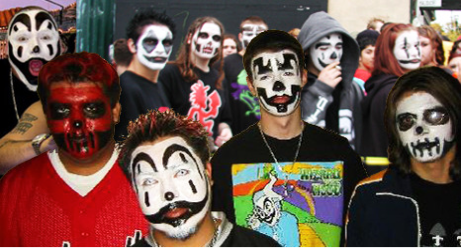 What had happened was that the Hip Hop duo: “The Insane Clown Posse” from Detroit were performing across the way at The House Of Blues. During the concert one of the groups singers Joey Utsler better known to his fans as Shaggy 2 Dope fainted and fell off stage postponing not only the show but the rest of the bands tour dates. Theirs fans called “Juggalos” who like the
band also paint their faces like clowns just couldn’t go home and turn on the nightly news in concern for their sick clown ; no they had to riot in displeasure of the cancelation. As I sat at the table wine glass in hand, I took in my last sip of the Renegade Ridge Pinot Noir which had an elegant long finish.

At the same time and was reminded of a quote:

“Just because everyone is behaving like a clown it doesn’t mean you have to join the circus.”